New Pulsars as Probes of Fundamental Physics and Astronomy

Pulsars are unrivaled laboratories for studying a wide range of phenomena in fundamental physics and astronomy. Even though we have been searching for (and finding) pulsars for over 60 years, we have only scratched the surface of the Galactic pulsar population (Lorimer et al. 2006; Levin et al. 2013). Pulsar surveys are still sensitivity limited, and new surveys invariably uncover unique, scientifically valuable gems. An incomplete list of the science enabled by new pulsars includes:

An Example Pulsar Survey Using ALPACA on the GBT

The case for large pulsar surveys is strong, but how successful could ALPACA on the GBT be, especially in light of past and future surveys with next-generation instruments such as FAST? To answer this question, former GBO summer student Lulu Agazie (currently a graduate student at the University of Wisconsin – Milwaukee) simulated a variety of potential GBT pulsar surveys, considering different receivers and regions of the sky, and taking into account the likely yield from other, sensitive telescopes. This project determined that an L-Band survey of the Galactic plane visible to the GBT, but skipping the parts of the plane visible to FAST, would be the most fruitful (see Figure the figure below). We estimated that a total survey duration of ~5000 hours would be “reasonable” and could detect approximately 500 new pulsars, about 40-50 of which would be MSPs. This would be one of the most successful pulsar surveys ever, but would likely require more than a decade to complete. 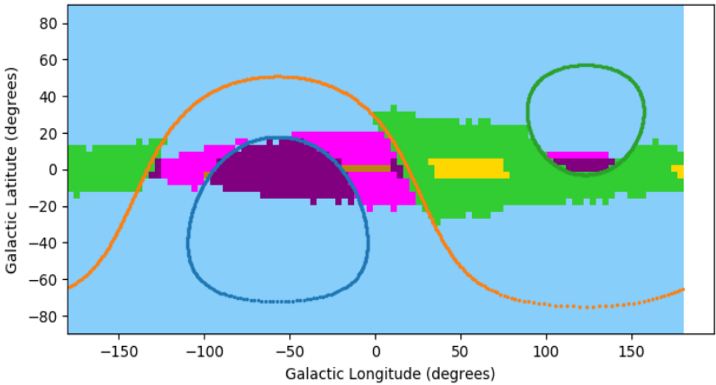 Figure: Optimal pulsar surveys in different parts of the sky. Colors indicate different past and future surveys: CRAFTS with FAST (green), the PALFA survey with Arecibo (yellow), the HTRU survey with Parkes and Effelsberg (dark purple), an ultra-wideband survey with the GBT (gold), and an L-Band survey with the GBT (pink). Light blue indicates regions with few pulsars. The GBT surveys use a dwell-time of 180 seconds, and different dwell times change the optimal survey region slightly by making the survey more sensitive. The colored lines are of constant declination: -45 degrees (the limit of the GBT, blue), -12 degrees (the lower limit of FAST, orange), and 60 degrees (the upper limit of FAST, green). We use the three regions where a GBT L-Band survey is best (in pink) for the rest of our analysis.

At the time, the only GBT receivers that could be used for such a survey were the single pixel L-Band receiver and the 7-beam FLAG PAF. Surprisingly, FLAG only offered a marginal benefit over the L-Band receiver for a fixed amount of telescope time because its wider field of view (FOV) was mostly offset by a narrower bandwidth and higher band-averaged Tsys.

We have repeated this analysis for ALPACA, and, it is a game-changer. As can be seen in the Table below, a survey that would take over 6,000 hours with the L-Band receiver or FLAG could be completed in less than 800 hours (assuming an observing efficiency of 75%), while surveying a larger region of the Galaxy and finding more pulsars. For context, the soon-to-be-complete Green Bank North Celestial Cap Survey (which has been ongoing for more than a decade) has averaged about 500 hours per year and discovered about 200 pulsars. We can therefore expect ALPACA to accomplish more in less than two years than what a single-pixel L-Band survey would accomplish in over a decade!

It is important to note that these results do not account for the deleterious effects of radio frequency interference (RFI), which decreases sensitivity and hence survey yield, especially for long-period pulsars (Lazarus et al. 2016). However, ALPACA can be tuned to a region of the spectrum relatively free of RFI, and we have added a survey degradation factor to account for the loss of some bandwidth near the edges of this range. Thus, while the estimates in the Table are probably somewhat optimistic, we do not expect the fundamental result to change – ALPACA on the GBT would be revolutionary for pulsar science.

The benefits of ALPACA on the GBT are so significant that it opens up entirely new possibilities. With 85% of the celestial sphere visible from the GBT, it may be feasible to survey a much larger region at higher Galactic latitudes, or to conduct more sensitive searches in especially promising regions of the Galaxy, such as the Galactic center (which was not accessible with Arecibo and will not be accessible with the full sensitivity of FAST), or parts of the sky with a dearth of MSPs. These approaches would be especially important for improving sensitivity to GWs and for finding young pulsars.

FRBs originate primarily from extragalactic sources and occur at a rate of about 5000 per day over the whole sky. Widefield telescopes such as ASKAP and CHIME have dramatically increased the detection rate in recent years to of order one per day, but still a small fraction of the total rate. As with pulsars, some FRBs have greater value than others for showing unique phenomenology that can lead to a better understanding of their extreme emission physics (10^{10} times brighter than Galactic pulsars), their dynamics (e.g. spin and precession), and cosmological population statistics. Finding these rare, key objects necessarily requires a large detection sample to choose from. At the same time, large FRB samples will ultimately allow tomographic mapping of the electron density and magnetic field of the intergalactic medium and galaxy clusters along with probing the interstellar media of host galaxies as well as our own.

ALPACA on the GBT will yield FRB detections as a by-product of pulsar surveys. Although the detection rate will be smaller than the rate from the very wide-field telescopes, ALPACA allows some unique coverage of the discovery parameter space. FRBs discovered at L-band complement those found by CHIME in the lower 0.4-0.8 GHz range. Some FRBs that show repeated bursts are detected at L-band much more frequently than at low frequencies; a notable example is the first repeater FRB 121102 discovered at Arecibo, which has been detected only a few times with CHIME but more than 2000 bursts have been found at L-band, suggesting that other FRBs are likely missed by CHIME (and vice versa for L-band surveys). The FAST telescope, with much larger collecting area than the GBT, has provided most of the detections from FRB 121102, but its correspondingly smaller field of view (even with its 19-beam feed), implies a smaller survey speed, which seems to be more important for new FRB discoveries. The spectral properties of FRBs are much different than those of pulsars and it is clear that wide frequency coverage is needed to get a clear picture of the emission process, which may be modified by frequency-dependent propagation effects in intervening media. The GBT with ALPACA will provide significant coverage of L-band in FRB surveys that have a larger survey speed than FAST. While the instantaneous field of view is similar to that of the VLA at L-band, VLA surveys are limited to only a coarse time resolution that causes many bursts to be missed. GBT backend processors will not have this limitation.

ALPACA on the GBT will also allow follow-up observations to search for repeated bursts from FRBs, particularly those found with other telescopes that have poor sky localizations and lower sensitivity. ALPACA on the GBT will also provide the ability to search efficiently for FRBs in the directions of nearby galaxies (e.g. M31) and galaxy clusters (e.g. Virgo), that are extended at scales much larger than an individual beam of a single-pixel GBT receiver. The recent discovery of a Galactic FRB, the mega-Jansky burst from the soft gamma repeater SGR 1935+2154, underscores interest in sampling a large number of galaxies efficiently to capture such relatively rare events. The Galactic SGR/FRB demonstrates that the range of burst luminosities covers many orders of magnitude and that large samples of bursts from galaxies at similar distances will help disentangle the luminosity function from inverse square-law effects. It is also possible that FRB sources fall into multiple classes of objects (e.g. neutron stars vs. black holes, cosmic strings, etc.).

The GBT has revolutionized studies of Galactic HI, OH, and other species because it provides high sensitivity to low surface-brightness emission over most of the celestial sphere. These capabilities remain unequalled to this day and have resulted in major advances in our understanding of many aspects of the Milky Way. Detection of low surface-brightness emission requires long integrations, thus limiting the sky coverage that can be achieved in the available time. ALPACA on the GBT will be every bit as transformational for these studies as the GBT has been, and will allow advances in many areas, a few of which are listed here.

Downloadable pdf version of this section